Lifting industrial objects up to 10 Tonnes is always going to be far too much for any human to lift without the aid of a Lifting Jacks of some kind, unless the person concerned is a ‘Super Human’ like that guy on TV who can swim under the sea for an abnormal extended period of time. 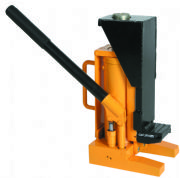 The Toe Jack is operated in a very similar way as the bottle jack and many other designs, the toe is placed under the load, the jack is then raised by pumping hydraulic pressure in to the Jack’s cylinder, which just like a Bottle Jack, raises the toe and lifts the load. The Toe Jack can then be lowered safely by turning the pump handle which gently releases the pressure in the Toe Jack and lowers the load into place.

Toe Jacks are usually used in combination with Machine Skates or Pallet Trucks to lift and shift bulky, heavy items.